Brian Marchese is a Phi Beta Kappa graduate in Philosophy from Connecticut’s Wesleyan University, where he examined the neglect of the body in Western thought.

His passion for running and racing as a 12-year member of the Central Park Track Club in NYC led him to complete twelve marathons but also to a growing litany of injuries that worsened into his thirties, until a herniated disk in his back forced him to leave long-distance running. After a long and frustrating search for a modality that could address not only his injuries, but, more importantly, the need for both resilience and balance to break the injury cycle, he discovered Rolfing®. It worked!

Brian entered the program at The Rolf Institute® of Structural Integration in Boulder, Colorado and completed his clinical work through the European Rolfing® Association in Munich, Germany in 2002. In 2005, he graduated with Advanced certification in Boulder. Today, he remains dedicated to lifelong learning, with continued studies ranging from spinal and pelvic mechanics to methods of functional integration, visceral manipulation to cranial-sacral.

Inspired in part by his own athletic pursuits and those of his clients, Brian has a particular eye for the relationship between structure and function. In 2006, he completed his Rolf Movement® certification. At the well-respected Pilates Chicago studio, he went through the Pilates instructor training program in 2010.  While he keeps up his own running mileage, he has learned through the years to complement it more wisely with well-rounded functional training. His ongoing inquiry into what a fluid, enlivening, and evolving experience of embodiment can mean has led him to dive deeply into approaches to movement such as Pilates, yoga, Gyrotonic®, TRX Suspension Training® and RedCord. He has been known to brave even the female-dominated Bar Method arena in order to investigate the structural-functional challenges being faced by a particular client.

Brian’s interests include working with special populations. He was an assistant in the Motion Analysis Center at Chicago’s Children’s Memorial Hospital, which focuses on pre- and post-operative gait analysis of children with neuromuscular disorders. He was also a Rolfer-in-residence at the Shake-A-Leg, Inc summer residential alternative therapy program then located in Newport, RI for people with spinal cord injuries, stroke, cerebral palsy, and traumatic brain injury. 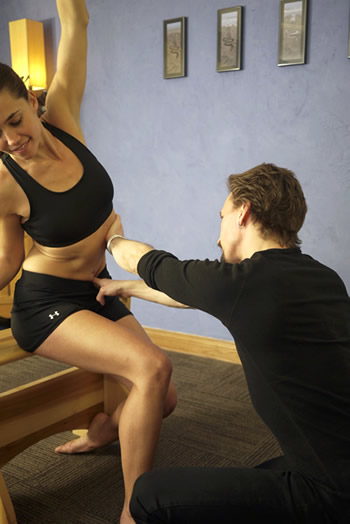